Many centuries ago thick forests around Sopotskin were home to yatviag tribes - of which only burial mounds and pagan worshipping sites remain today. According to one of the versions, the town got its name from its first owner – Prince Sopotka. The Sopotko family sold the town and nearby lands to the Volovichy family in 1655. 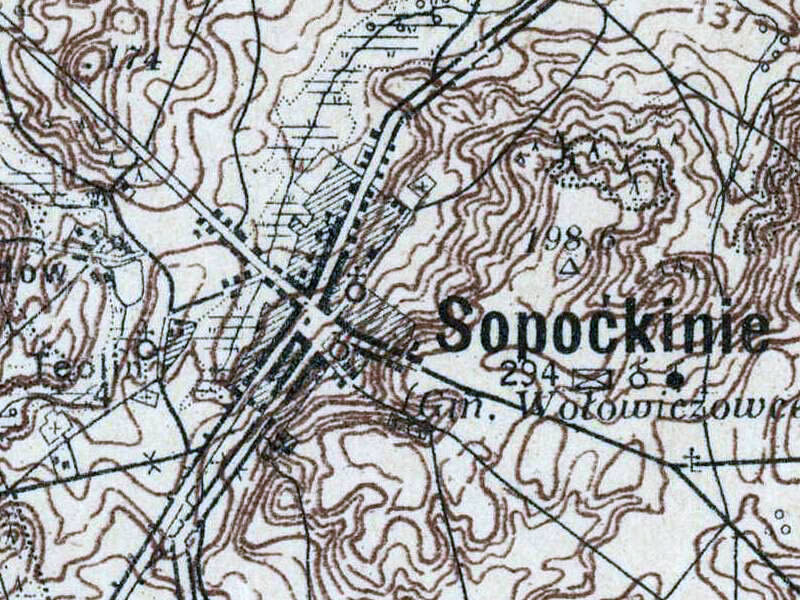 The old map of Sapatkin

Since long time ago the town was at the crossing of different roads between major cities of the Grand Duchy of Lithuania. This and Augustow Canal connecting Neman with a major river in Poland was helped the locals to earn money from trade, specifically in timber.

In 1789 the Volovich family established a Catholic parish in a small town called Teolin. A stone’s throw away from Sopotskin, it was to draw the craftsmen from the latter. With the flow of time Teolin merged with Sapotskin so only parish name remains of it. A few years before that the town got the right to host annual markets. At that point it numbered 389 persons, 82 houses and 4 streets. 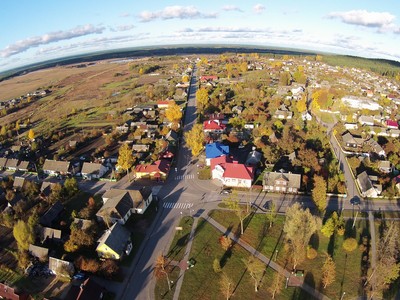 In 1795 the third partition of Rech Pospolita took place and Sopotskin landed in Prussia, though only for two decades after which it was passed to Poland. According to 1897 census the town population was 2415 out of which around 1700 were Jews. Sopotskin had one of the largest and nicest wooden synagogues and Poland – it was based by the market place and it burnt down during the war.

The Jewish community chronicle was destroyed by fire in the early 1900s. The tombstones that were seen in the early 20th century supported the fact that the first Jewish residents of Sopotskin had come there more than three centuries before.

WWI saw a number of families deported on the orders of the Russian tsar in view of the oncoming frontline. Many returned after the war to restore their properties and revive the city. Being in Poland Sopotskin was connected with the Russian Empire by a bridge across the Lososyanka River.

After neighbor Poland had gained its independence in 1918, the borders around the town blocked all the traffic limiting the income sources of the locals to small-scale trade in crafts and wholesale trade in agricultural products. Taxation by the Polish government, majorly anti-Semitic was quite steep.

A dwelling house in the former Asochniki Street. Blocked door could have been a Jewish store

Economic hardship forced the Jews to take up agricultural activities like cow breeding and keeping orchards. A school in Hebrew was established by the community in a private building. Before the Nazi invasion a lot of Jews immigrated from Sopotskin to the USA. According to 1921 census out of 1700 residents of Sopotskin 900 were Jewish, the entire population lived in 294 households of the town.

The Soviet 1939-takeover of Western Belarus was cheered by the Jews who thought the Communists would protect them from frequently unfriendly Poles. It turned out, however, that the private business owners were persecuted by the Secret Service NKVD and with many properties confiscated, many families were sent to Siberia.

The Nazi invasion of the town started with the bombings which set the town buildings on fire. Many buildings were torched including the old synagogue.

The Jews were relocated to the Teolin monastery which became their prison premises. No food was provided to the inmates and they could only get some products from local peasants at nighttime. In June 1942, shortly before the ghetto was destroyed, men were separated from the community and led to their execution ground in one of the death camps. In November the rest of the Jews were transported to a nearby Kolbasino death camp with extremely harsh conditions which killed dozens each day. Survivors were marched to a ghetto in Grodno from which deportations to Auschwitz took place later on. 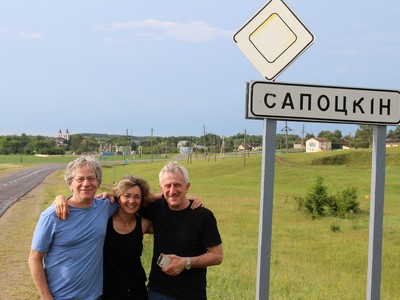 On a visit to the ancestral grounds

Today Sopotskin is home to over 1200 persons and is a small town in Western Belarus. If you’d like to visit Sopotskin as your ancestral grounds, I’d be happy to be your guide! 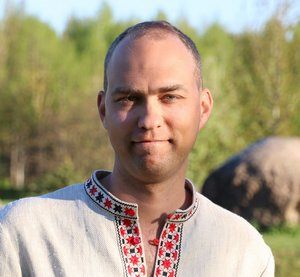 How do I apply for a Belarus tourist visa?

Applying at their local Belarus Consulate, the citizens of migration-secure states (e.g. the USA, Canada, Japan and others) can obtain a short-term...

The form of application for a visa to Belarus has become digital and you can save and send it as a PDF file. It is only a 2-page document that is available...

Anything I should know about landing in MSQ Minsk Airport?

Quite a number of things, as a matter of fact. Let’s examine a typical case from my travel agent’s past with a traveler landing in Minsk Airport (MSQ) and applying for a visa...

How do I apply for a Belarus private/guest visa?

People, who want to travel to Belarus to see a friend, take care of the grave of a relative, take part in the court hearings, etc. need to apply for a private visa...

This article covers field family research in Belarus that in most cases comes after dealing with the State archives of Belarus and genealogical research.

Using a plastic card in Belarus?

A plastic card is a fine thing, no doubt, but there have been a number of cases when the ATM displayed ERROR, or required a PIN code...

While most tourists agree that Belarus is not the country for grand shopping, there are still some things that can be brought back as souvenirs...